The Spectre Of A Nuclear Confrontation

Would Putin use nuclear weapons?

The prospect of a nuclear exchange between Russia and the United States seemed, until recently, to have ended with the Cold War. Threats by Russian President Vladimir Putin to use the weapons to keep NATO out of the Ukraine conflict have revived those decades-old fears.

The threats come amid the fraying of nuclear arms control agreements between the two nuclear superpowers that had stabilized strategic relations for decades.

As an arms control expert, I see the war in Ukraine as an added strain but not a fatal blow to the system that has helped to keep the world from nuclear devastation. That system has evolved over decades and allows U.S. and Russian officials to gauge how close the other side is to launching an attack.

Keeping an eye on each other

Arms control treaties rely on each of the nuclear superpowers sharing information about deployed delivery systems – missiles or bombers that could be used to deliver nuclear warheads – and to permit the other side to verify these claims. The treaties usually include numerical limits on weapons, and implementation of a treaty typically begins with baseline declarations by each side of numbers and locations of weapons. Numbers are updated annually. The two sides also regularly notify each other of significant changes to this baseline through what are now called Nuclear Risk Reduction Centers.

A key element of all arms control treaties has been the two sides’ ability to use “national technical means,” such as satellites, along with remote monitoring techniques such as radiation detectors, tags and seals, to monitor compliance. Remote monitoring techniques are designed to distinguish individual items such as missiles that are limited by treaty and to ensure that they are not tampered with.

The 1987 Intermediate Nuclear Forces (INF) treaty introduced a major innovation: the use of on-site inspections. Before that treaty, the Soviets had resisted U.S. proposals to include such inspections in verification. But as Soviet Premier Mikhail Gorbachev moved domestically to a process of glasnost (openness), he embraced on-site inspections, and similar provisions have been included in subsequent treaties. They include both regular announced inspections and a certain number of annual unannounced short-term challenge inspections to guard against cheating. 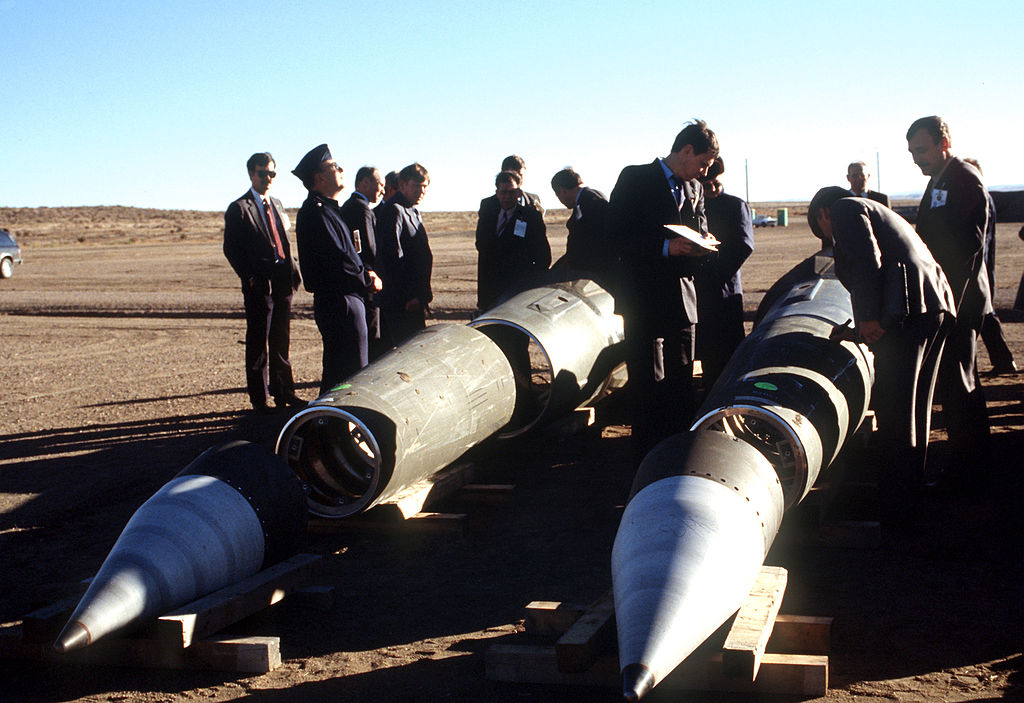 The history of keeping nuclear arms in check

National security scholars such as Thomas Schelling and Morton Halperin developed the concept of arms control in the late 1950s and early 1960s amid an accelerating U.S.-Soviet arms race. Arms control measures were designed to increase transparency and predictability to avoid misunderstandings or false alarms that could lead to an accidental or unintended nuclear conflict. As the concept evolved, the goal of arms control measures became ensuring that defenders could respond to any nuclear attack with one of their own, which reduced incentives to engage in a nuclear war in the first place.

The approach gained traction after the 1962 Cuban Missile Crisis when the surprise deployment of Soviet nuclear-armed missiles less than 100 miles from the U.S. brought the world to the verge of nuclear war. Initial agreements included the 1972 Strategic Arms Limitation Talks agreement (SALT 1), which put the first ceilings on U.S. and Soviet nuclear weapons. Subsequently, Gorbachev negotiated the INF treaty and Strategic Arms Reduction Treaty (START I), which brought reductions in the two sides’ nuclear forces.

The INF treaty for the first time banned an entire class of weapons: ground-launched missiles with ranges between 500 and 5,500 kilometers (311 and 3,418 miles). This included U.S. missiles capable of hitting Russia from the territory of U.S. allies in Europe or East Asia and vice versa. START I applied to strategic nuclear weapons, such as intercontinental ballistic missiles (ICBMs) launched from one superpower’s homeland to attack the other’s territory. In 2010, President Barack Obama and then-Russian President Dmitri Medvedev signed the New START agreement, which further reduced the two sides’ deployed strategic nuclear forces. And in 2021, President Joe Biden and Putin extended that treaty for five years. The treaties have supported dramatic cuts in the two countries’ nuclear arsenals.

New challenges for an aging system

Inspections under the INF treaty ended in 2001 after the last banned missiles were removed from deployment. Under the Obama and Trump administrations, the U.S. accused Russia of violating the treaty by developing, testing and deploying cruise missiles that exceeded its 500-kilometer limit, an accusation Russia rejected. Backed by NATO allies, the Trump administration withdrew from the treaty in 2019. This left long-range strategic weapons as the only nuclear weapons subject to arms control agreements.

Shorter-range non-strategic nuclear weapons – those with a range of less than 500 kilometers, or roughly 310 miles – have never been covered by any agreement, a sore point with Washington and NATO allies because Moscow possesses far more of them than NATO does.

Arms control has been declining in other ways as well. Russia has embarked on an ambitious nuclear weapons modernization program, and some of its exotic new strategic weapon systems fall outside of New START’s restrictions. Meanwhile, cyberattacks and anti-satellite weapons loom as new threats to arms control monitoring and nuclear command and control systems.

Artificial intelligence and hypersonic missile technology could shorten the warning times for a nuclear attack. Russia has been deploying missiles that can carry both conventional and nuclear warheads, sowing confusion. And Russia worries that U.S. missile defense systems, especially in Europe, threaten strategic stability by permitting the U.S. to carry out a nuclear first strike and then prevent an effective Russian nuclear response.

Before the Ukraine war, Biden and Putin had launched a Strategic Stability Dialogue to tackle these issues and lay the groundwork for negotiations on a replacement for New START before it expires in 2026. But the dialogue has been suspended with the outbreak of hostilities, and it is difficult to foresee when it might resume.

Putin turns up the heat – but not to a boil

Putin’s recent moves have further shaken the rickety strategic security architecture. On the eve of the Russian invasion of Ukraine, he said that “anyone who tries to interfere with us … must know that Russia’s response will be immediate and will lead you to such consequences as you have never before experienced in your history” and that Russia possesses “certain advantages in a number of the latest types of weapons.”

With the war underway, Putin announced an “enhanced combat alert” of the country’s nuclear forces, which is not a regular alert level in Russia’s system comparable to the U.S.‘s DEFCON status. In practice, the enhanced combat alert consisted largely of adding staff to shifts at relevant nuclear weapon sites. The announcement was designed to discourage NATO from intervening and to intimidate Ukraine.

Nonetheless, U.S. national security officials expressed concern that Russia could use tactical nuclear weapons in Ukraine if NATO forces were drawn into direct conflict with Russia. Use of the weapons is consistent with Russia’s military doctrine of “escalate to de-escalate,” according to the officials.

Even in the face of Putin’s strategic nuclear saber rattling and concerns about Russia’s use of tactical nuclear weapons, however, the arms control framework has held sufficiently firm to preserve strategic stability. U.S. nuclear commanders have criticized Putin’s moves but have not sought to match them. They do not see evidence that Putin has taken steps to escalate the situation, like placing non-strategic nuclear warheads on airplanes or ships or sending nuclear-armed submarines to sea.

So far, arms control has played its intended role of limiting the scope and violence in Ukraine, keeping a lid on a conflict that otherwise could become a world war.