Portraits of A Scholar

It would be close to a year, that I would come to learn of the passing away of Joseph Hanson Kwabena Nketia, the great Ghanaian scholar and composer at the age of 97 years on the 13th of March 2019 in Accra. 14 years ago, I had the honor to interview him for Neue Zeitschrift für Musik, the leading German review of contemporary music, founded by Robert Schumann. Nketia was born on June 22, 1921, one day after my own father, which gives me a measure of time and space since my father passed away 24 years ago, and the little I recollect of what he told me about his youth, in pre-war Germany, seems so enormously far away from everything I have experienced in my life, it feels like a different world, a different age.

Little did most Germans know about Ghana, the Gold Coast, a British colony at that time, and vice versa, although an exchange had been going on for centuries. Rather accidentally I learned that in the 17th century in Glückstadt, the next small town to where my father spent the last 15 years of his life, founded by the king of Denmark, there had been an African Company. Osu Castle, then called Christiansborg and today seat of the Ghanaian government, had been the center of Danish activities for most of the time from mid-17th to mid-19th century. In Christiansborg, in 1828, the first Basel missionaries arrived. They built up a mission station at Akropong and in 1848 set up the teachers training college. A new building was inaugurated http://www.bmarchives.org/browse/#q=Akropong%20Training%20Collge at the occasion of the 100 year anniversary in 1928. Here, nine years later, Nketia began to study.

Born in Mampong, in the Ashanti region, his mother, who herself didn’t read and write, had decided he should go to school. His parents not being Christians, he had a first-hand experience of traditional music and dance, but in school he got to know European church music as well. He enjoyed both, to him there was no contradiction. He learned to play the harmonium, and became interested in the Twi language, into which the missionaries had translated lyrics of chorals by Mozart, Beethoven, Mendelssohn and the like, as well as in music theory. He began to adapt this knowledge to local traditional music
While collecting material for a compilation of more than 100 Akan songs, which was later published in London, he met Ephraim Amu. The composer and teacher, today on the 20.000 Cedi bank note of Ghana, had introduced local melodies into Ghanaian church music. Amu had taught at Akropong from 1926 to 1931, but was bumped when he insisted on wearing traditional clothes at church services. He then taught at Achimota college where Nketia became his pupil, after which, in 1944, he was invited to London by Ida Ward, head of the Africa department of the university, who had heard about his studies. He stayed five years, studying linguistics, music, and social anthropology.

Back in Ghana, Nketia worked for two more years at Akropong College, married and was then appointed research fellow at the university. He took part in the Arts Council and in the orchestration of the independence ceremony, published widely to make known Ghanaian music, also looking for ways to make his knowledge accessible to his own people. In 1958, he founded the Ghana Music Society and in the same year was invited to the USA as a fellow of the Rockefeller Foundation. He continued his studies at Juilliard and Columbia with composers such as Henry Cowell, Walter Piston, and Milton Babbitt as well as ethnomusicologists Curt Sachs, Melville Herskovits, and Alan Merriam.
In 1965, Nketia became the director of the Institute of African Studies at the University of Ghana, Legon. In 1979, he was appointed professor at the University of California L.A. and from 1983 to 1991 at Pittsburgh, later teaching in many other universities as well, from Harvard and Stanford to Brisbane and Beijing. His book “The Music of Africa”, issued in 1974 and translated into many languages, has become a standard work. “Nketia was recognized the world over as the leading ethnomusicologist on Africa”, Akin Euba has stated, Nketia’s successor at Pittsburgh who has also died recently. “What is not generally known is that he also made important contributions to modern African composition.”
As a composer, Nketia was well aware of what was going on in postwar European and American contemporary music, but decided not to write atonal works as Euba did who, in his best known work, the opera “Chaka”, combined twelve-tone music with traditional Yoruba chanting. Premiered at the university of Ife, “Chaka” has rarely been performed and never as a fully staged opera. Nketia preferred music that was accessible to his people. He adopted church modes, as a sort of compromise between modernism and what seemed acceptable to the African ear. “He developed a composition idiom”, says Euba, “which was directly derived from African traditional music. It is of interest that Nketia’s career as an ethnomusicologist began when he went in search of material that would be useful in developing his idiom of composition.” 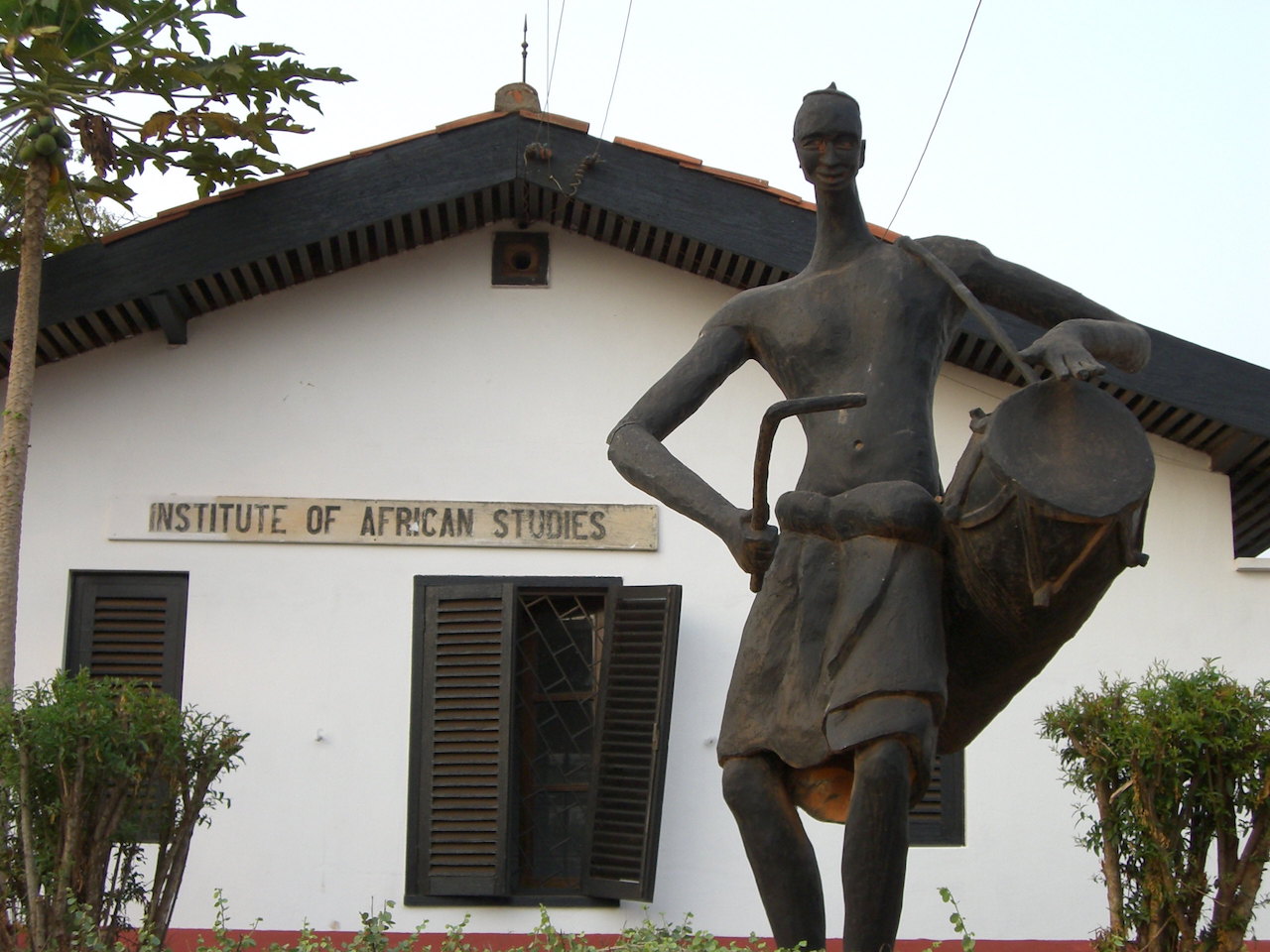 All his life, Nketia was looking for ways to cherish traditional music and culture while at the same time adapting to modern life. His recordings, video and photo collections have gone into the J. H. Kwabena Nketia Archives of the Institute of African Studies at the University of Ghana. Still part of what he envisaged remains unaccomplished. He wrote mainly for European instruments. Anyhow, when he heard Chinese performers play traditional instruments such as the Erhu, a simple two-string fiddle, at the World New Music Festival in Stuttgart in 2006, he came to the conviction that one might write for traditional Ghanaian instruments as well.
One attempt to do so was made by his pupil Nana Danso Abiam with the Pan African Orchestra. Nketia himself had a different idea. In the US he had met Harry Partch, the great composer who had developed his own set of instruments. This was what Nketia was up to when he came back from the US. He founded an instruments workshop, trying to advance traditional instruments or invent new ones, but it didn’t work well due to lack of support and interest.
As a composer, Nketia never just wrote works of music, he always thought of the occasion. This is how music was conceived in precolonial times, when every kind of event was accompanied by music and dance, and to adapt this way of thinking to the modern world, to invent new music for new occasions, might be the clue to reinforcing identity and local culture. Nketia has layed the ground from which to develop. It remains the task of future Ghanaian composers to take the next step.

Selected compositions
“Nketia wrote many songs and choral pieces, with Twi texts, which are well-known in Ghana”, writes Eric A. Akrofi in his biographical study “Sharing Knowledge and Experience. A Profile of Kwabena Nketia, Scholar and Music Educator”, first published in Accra in 2002.” His choral compositions are often included in the repertoire of many choirs in Ghana. Indeed, his songs and choral works have made such an impact” Akrofi remarks, quoting himself from an earlier text, that “Ghanaians know him best as a composer and associate his name with his song ‘Yaanom Montie’” as well as his choral works “Monkamfo No”, “Nkyirimma Nye Bi” and “Monna N’ase”. Besides choir works and songs, Nketia is best known for his piano cycle “African Pianism. Twelve Pedagogical Pieces” aimed at introducing African rhythms into piano lessons, among which the “Volta Fantasy”.
Nketia’s musical compositions include:
Republic Suite – No. 1 Flute & Paino, (Dr. Nketia performed “The Republic Suite,” perhaps his defining musical composition, at Ghana’s Republic Day Concert on July 1, 1960, celebrating the election of his friend Kwame Nkrumah as the nation’s first president.)
https://soundcloud.com/ampublishers/j-h-kwabena-nketia-republic-1
Four Flute Pieces, No. 2 (a widow’s prayer), flute and piano (4:54)
Libation, Hilife after E. K. Nyame, piano (2:03)
Mεsom Wo, french horn and strings (2:41)
Dance of the Forest, No. 1 (Mmoatia Sankuo), trio for strings (3:46)
Dance of the Forest, No. 2 (Ananse Akuamoa), strings and percussion (2:27)
Atwimu (traditional dance), piano (2:22)
Asaadua (traditional dance), violin and piano (4:24)
Adanse Kronkron (orchestral) (2:00)
Dance of the Maidens, No. 1 (canzona for flute, oboe, piano, and percussion) “Nkc !Gyina Yεn” (2:43)
Dance of the Maidens, No.2 (canzona for flute, oboe, piano, and percussion) “Chene Nante Brεε” (2:52)
Dance of the Maidens, No.3 (canzona for flute, oboe, piano, and percussion) “Mampcn Kwan Ware” (4:06)
San Bra Fie (air for strings) (2:19)
Gya Me Kwan (canzona), flute and piano
Three Ghanaian Airs, No.1 (Obi Nya N’ade), Hilife after Kakaiku, viola and piano (1:03)
Three Ghanaian Airs, No.2 (Owora), Hilife after Kyei Mensah, viola and piano (2:04)
Three Ghanaian airs, No.3 (Dagarti work song), viola and piano (1:33)
Cow Lane Sextet, No. 1, piccolo/flute, clarinet, trumpet, xylophone, timpani (atumpan), and side drum (brekete) (3:35)
Akatin (traditional dance), strings (1:58)
Dantuo Mu Awc (traditional Nnwomkorc song), flutes and piano (2:04)
Nkwantabisa (at the crossroads), trio for flutes, violin, and cello (2:18)
Me Nua Sεεwaa (serenade), flute and piano (2:10)
Onipa Bεyεε Bi (canzona), trumpet and piano (1:37)
Cdcnscn, Hilife after O. P. Mireku, vox humana, acoustic guitar, flutes, and percussion (2:46)
https://www.swarthmore.edu/libraries/jh-kwabena-nketia