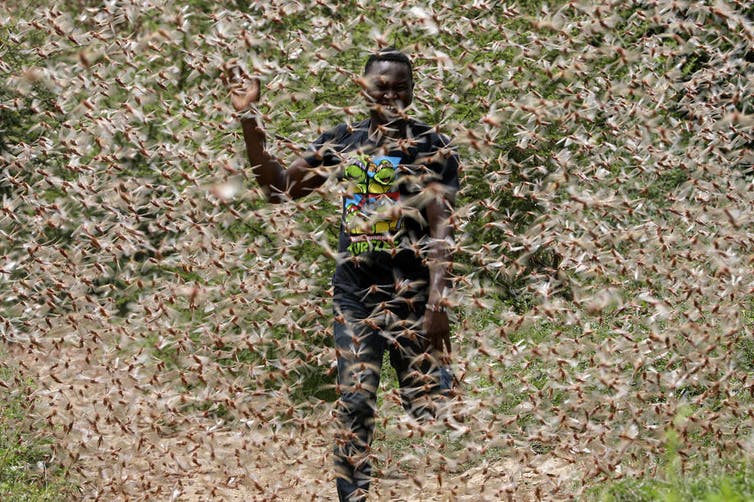 A man runs through a desert locust swarm in Kitui County, Kenya.DAI KUROKAWA/EPA

Outbreaks of insect pests and insect invasions are on the rise on the African continent.

Currently, several African countries – including Kenya, Ethiopia and Somalia – are dealing with the one of the most devastating outbreaks of desert locusts. This comes after recent fall armyworm invasions which affected more than 44 African countries. Countries also grapple with more localised pest invasions of insects like the South American tomato moth and maize stem borers.

Many countries suffer from a lack of food because the insects can consume, or destroy, huge amounts of crops. Just five invasive insect pests are estimated to cost the African continent US$1.1billion every year.

Insect-pest related crop losses and pest invasions are projected to increase as the climate changes. Projected changes include changes in temperature – with many regions becoming warmer – and the amount of precipitation. Insects thrive in warmer temperatures.

Studies show that insect-pest related yield losses for maize, rice and wheat are expected to increase by between 10% and 25% for each degree Celsius of warming. The impact will be huge. These crops are the three most important crops in the world, accounting for 42% of calories eaten.

A changing climate causes changes in temperature. This has a huge impact on insects because they are cold-blooded animals. This means that their growth, development and life-cycles are regulated by temperature. Consequently, when temperatures are warmer or colder than the norm, this directly affects their development, growth, reproduction, and ultimately population numbers and distribution.

As temperatures rise, the insect’s metabolism speeds up. Because they are burning more energy, they consume more, develop faster and larger, suffer less mortality, reproduce faster and lay more eggs. The end result is an increase in populations, and consequently, more crop damage.

A changing climate will also affect rainfall patterns. We are already seeing this with more incidents of droughts and floods. These changes affect the interactions between insect pests, plants and their natural enemies.

For example, there is substantial evidence showing that drought stress increases the number of crop plant eating insects. There’s a bit of contention as to why this is the case, but the plant stress hypothesis suggests that insect performance increases with plant stress because the plant’s level of investment in its chemical defences decreases.

Changes in the weather can also affect the territory that insects live in.

There’s compelling evidence that insect distributional ranges are changing. As warming happens, insects are moving into new territories and exploring new habitats. They do this to find food and to escape competition and natural enemies.

Extreme conditions – like drought and floods – also alter the nutritional value of plants. Faced with the problem of a less nutritious plant, insects consume more plant tissues to get the amount of nutrients they need.

Climate change may also alter the interaction of insect pests and their enemies. These may be natural predators such as ladybird beetles, which eat aphids. They can also be introduced to control pests; Cotesia flavipes, for example, is an insect that has been introduced in various countries to control stem borers.

In a perfect world, natural enemies should be abundant when crop plants are under pressure from insect pests. But the ability of natural enemies to find the insect pests depends on their ability to tolerate changing weather conditions and how well they can move.

And when they find the insect pests, other factors – like the size of the insect host – are important. For instance, parasitoids (insects whose larvae live as parasites which eventually kill their hosts) develop inside the host. If the host insect is too small, there won’t be enough food for the larvae to grow and hatch. This may determine whether they stay to protect plants from the pests.

These are some of the key findings about the impact of climate change on insects. There is still a lot to be discovered, though.

More research needs to be done to develop a clear understanding of how climate change directly and indirectly affects insects, to help us predict what invasions could happen, and where. 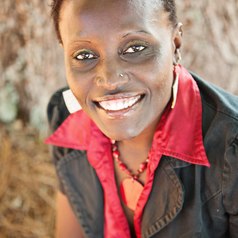 Dr. Esther Ngumbi is an Assistant Professor with the Entomology Department at  University of Illinois at Urbana-Champaign, Illinois. She is a Senior Food Security Fellow with New Voices, The Aspen Institute and has also serves as a Clinton Global University Initiative (CGI U) mentor for Agriculture.